Today saw the final match of the Spring Series taking place on Spring and New Pools. The weather looked promising with bright sunshine greeting us for the draw. Fish were moving around both lakes and prospects looked good for some big weights. The series was all but won by Sarah unless she finished in last place.

Fishing was good from the start with everyone catching small fish on maggot. Callum McCormack was first to put a net under a nice skimmer and Sarah was quick to catch a pound of roach.

On Spring Pool, Alex Warham set up a short line and was catching Perch and Roach on his top three. Kyle was fishing long on pellet and getting lots of bites. Jack Ross fished two lines, one at 6m and another at 5m off to the side, bites were slow for Jack but it wasn’t long before he started to put a few fish together.

Callum McCormack caught well but struggled to hit bites with the warm water fish were very active and line bites were a problem. Sarah Taylor pegged next door was also catching well but fish weren’t as big. On the other lake Kyle was living up to his reputation as the bit machine and catching steadily. At the weigh-in Callum McCormack won the match with 11lb of skimmers up to 3lb. 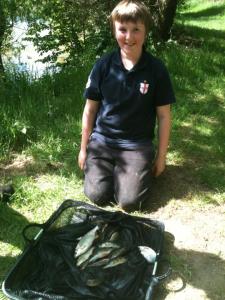 Alex Warham caught 2lb of roach and perch all caught short on maggot.

Jack Ross with 2lb 1oz of roach and perch

Final placings of the series. Well done to all that took part and congratulations to Sarah Taylor.