Long-standing club and forum member, ‘Huffy’, recently took his nieces’ boyfriend, Adrian, for his first attempt at barbel fishing, with the Lymm AC stretch of the Severn at Atcham being the venue of choice. It turned out to be a memorable evening as Huffy explains……

My nieces’ boyfriend, Adrian, had been texting me throughout the week, enquiring about going down to the ‘mighty’ Severn to catch his very first barbel. So, plans were made for a trip down there last Friday evening. As we drove down, I explained to Adrian(Chop) that there had been a few posts on the  forum only the day before saying that the river was really low and clear and it would be a real struggle to earn a bite before the sun was off the water. Sure enough from 6pm ’til 9pm, the rod tips didn’t move, then roughly 9.10pm, Adrian had his very first ‘two foot twitch’, which resulted in his first barbel of 4lb 2oz. 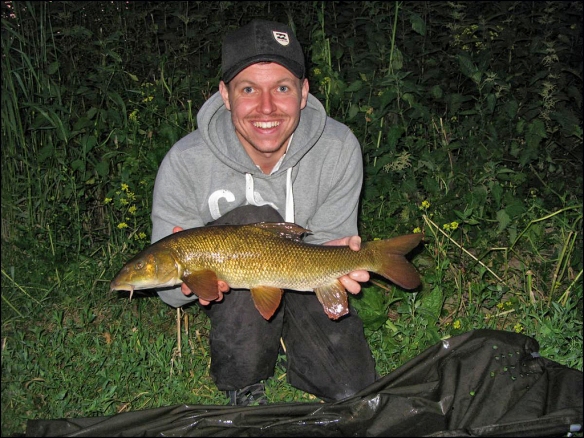 At this point, it was the perfect opportunity to show Adrian the important aspect of fish welfare when barbel fishing. I proceeded to show him how to put a barbel back safely after a long battle, explaining that he should face the fish into the current until it had fully recovered and was strong enough to swim away. A short time later he hooked a very good fish that took him into mid-river and became snagged, this resulted in him losing the fish. On examination of the hook-length, it could be seen that the Drennan sink braid was partially stripped. I explained to Adrian that he should be checking the hook-length after every fish landed if we were lucky enough to get another bite. He was shellshocked to say the least, but a short while later, he was back in action with his second fish of 7lb 1oz.

Adrian was obviously delighted at how things had turned out so far, but he hadn’t finished yet! A short while later, he was into yet another fish, this time the scales read 6lb 4oz and Adrian was ‘buzzing’!

By this time it was almost midnight and we had decided to call it a day. Adrian had already packed one rod away and was just about to pick up the other when the tip slammed over and the baitrunner began to sing. After a long hard fight, he landed what was to be the last and best fish of his session, a real beauty at 8lb 12oz !

A really memorable evening for both of us for different reasons. On the way home, Adrian asked me,  “How much is a decent Barbel rod?”. That’s when I thought to myself, ‘job done’ and ‘welcome to river fishing’. By the way, as much as I really wanted to,  I didn’t  fish, I sat with Adrian all evening, offering help and words of advice and to be honest, got more enjoyment seeing him catch than anything else. I really don’t know who was ‘buzzing’ the most on the way home, him or me!

Last and biggest of the session at 8lb 12oz!

Our thanks to Huffy for the words and congratulations to Adrian on what turned out to be an excellent first barbel session!  For more information about this and other waters on the Lymm card, visit our website www.lymmanglersclub.com  we look forward to welcoming you to our club.