We will start as usual with the catch of the month, sponsored by Cheshire Particles. I have decided to change how the competition is voted for this month. All entries are submitted to small committee for consideration. Between them they have over 100 years of angling experience and are well versed in every discipline of the sport. I have done this to ensure that each catch is judged fairly on its particular merits.

August is always a bit hit and miss with regards to results on the bank. High pressure and high temps can sometimes make it slow going. But if you find yourself fishing when that weather changes the rewards can be out of this world.

In his own words the first entry from AL Green:

I Did 48hrs on lymmvale last week , in extremely wet and blustery conditions with a cold NW blowing I Had a great session overall finishing up with 23 tench each and everyone between 5-7Lb and 4 Carp between 15 & 21lb. The fish I’m entering although it wasn’t the biggest of the bunch by any stretch , it was probably the prettiest carp I’ve ever had the pleasure of landing and a credit to the quality of fish in the vale. Sometimes size is simply irrelevant and this was one of those , Just a beautiful dark big scaled slate grey mirror. 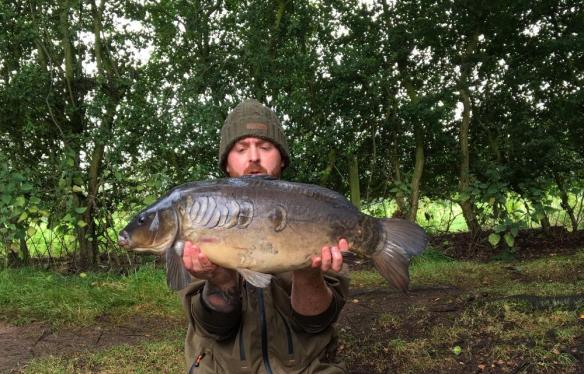 The second entry  this month and the first of three Barbel comes from John Hunsley.

9lb 13oz from Poachers field – Wroxeter on the evening of 21st August. it was caught on a rising river on a 12mm Krill dumb-bell fished on the inside line about 2 rod lengths out.

Third entry is another Severn Barbel.

Forum member Edward caught this barbel at Atcham. At 9lb 14oz caught on the 13th of August on double pellet it was the second fish of the evening and is reported to have put up on hell of a fight.

The 4th and final entry was from  junior member  James O’connor submitted by his dad. a 6lb 4oz Barbel taken from the lake of tranquillity.  The proud fathers words:

It gave the 10 yr old a fantastic scrap on his little 6 ft float rod , but with the clutch set right n some Words of wisdom from his fishing coach ( cough ,cough ) after  a battle of a good 10 minutes he slipped it in the net . Good old worm was the bait , the smile says it all and a fish he won’t forget in a hurry ( 3 days on , he’s still telling me his arms aching ) Anyone who’s fished this water will tell you how hard these fish fight , once hooked they just refuse to surface. 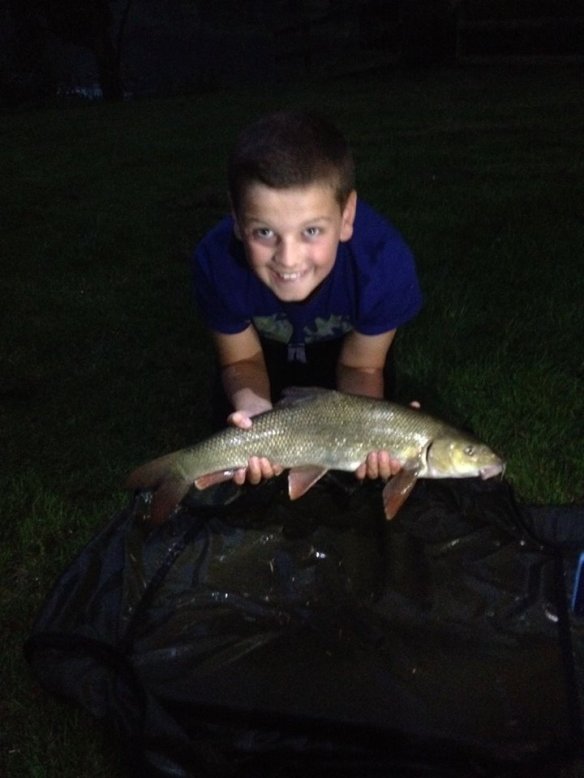 There can be only a single winner and for the month of August this is…… AL GREEN.

I know that the prize goes to AL not just for the capture of his carp, but for the total catch of his session. The committee wish to remind people that each entry is indeed measured on its individual merits. Its not always going to be the biggest fish that wins the prize.

Well done AL, it was indeed an amazing haul of fish that is more than worthy of the top prize. I must that all of the entries for catch of the month and remind you all that you need only to be in it to stand a chance of winning it.

It goes with out saying that out sponsors Viking baits are doing us proud by continuing to support the competition so our thanks as always go out to them. I personally have just returned from a weeks fishing in France where their baits helped me put together a very decent result in difficult conditions.

What else is happening….

CATCHPENNY POOL is open for angling.

The lake has been open for about a fortnight and early reports are very positive. Good numbers of fish have been banked. They appear to be around mid doubles but at the time of writing I know of 3 different 20lb plus fish.  Please make yourself aware of the water specific rules for this venue before venturing onto the banks.

One of the bigger fish landed so far…

Yet another new water.

I am sure you are aware already the club recently announced its acquisition of another new water, Nunnsmere in the heart of Cheshire. This water has seen very little in the form of angling pressure due to it being something of a private no access site. Stories abound of what is in there, massive pike, huge carp, giant perch and god alone knows what else. Evidence of any of these super fish has yet to surface but we can all day dream about the possibilities whilst we wait for the club to finish any works required before its opened to fishing. Carp and pike have been witnessed by club officials doing their duties but with 60+ acres there are plenty places to hide. I must stress at this stage that there is STRICTLY NO ACCESS to the site until its opening is announced. But to wet your appetite here are a few pictures…

Thanks to mancman for the pictures.

So that’s just about all for now. We are entering a special time of the year for angling when the fish start to feed up for the coming cold periods. The leaves on the trees are signalling the changing of seasons and for an avid pike angler like me that means only one thing………. “Winter is coming!”