Great day on the Bridgewater Canal on Saturday 4th November with 19 Lure anglers mainly from the Eatern European community coming together to experience a very dismal day in Runcorn.

Saturdays weather offered anglers showers and 10oC and due to a week of showers meant that the canal was crystal clear, all in all not a great start. Saying that the Bridgewater Canal Motorboat Club provided Bacon butties at registration to mood.

The event came about after a couple of interactions with poachers from the Eastern European community which resulted in an operation between the club and the EA resulting in prosecution of one person who was wanted on a warrant and deported. Eager to get the most use out of the Canal we engaging the Building Bridges team within Angling Trust to organise an event, working together with David Lees, Angling Trust regional officer for the North West we began organising.

New to me, Lure matches are different affair than matches I am used to. Lure matches consist of pairs of anglers who are selected at random at the start of the event. Rather than the results being based on weight, Lure matches are based on cumulative length of fish with Pike, Perch and Chub counting and having minimum size limits. Anglers are trusted to record their catches between the pair of anglers along with photo including a tape measure.

Well the votes are cast and results are in for Catch of the Month during July and August. As we have done for the last few months we have run the competition through the club’s Facebook page.

Entering the photo his dad gave an account of the capture:
“I took my son to atcham last week for his first proper taste of night time barble fishing.(24/08/17)

this is part of the evening…

His first brace of fish. As soon as his first one had hit the net the other rod hooped over resulting in 2 in the net at once. The first was 7.5lb and a new p.b. beaten seconds later by a 9.9lber, to say he was over the moon and itching to get back is an understatm

Picking up his prize of baits from RG Baits 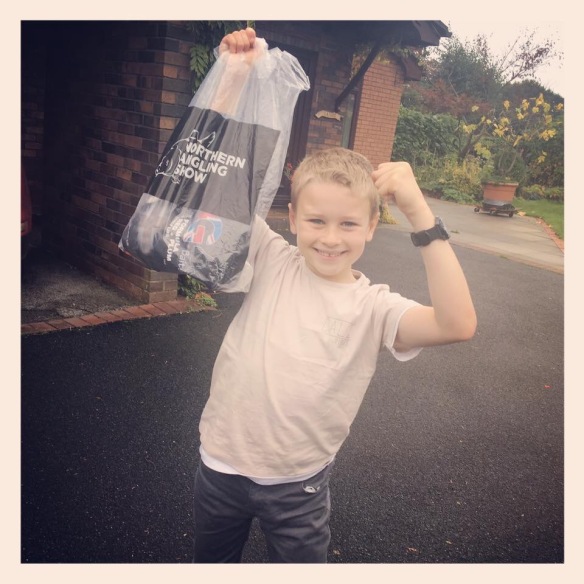